In the City of London the talk is green, but follow the money 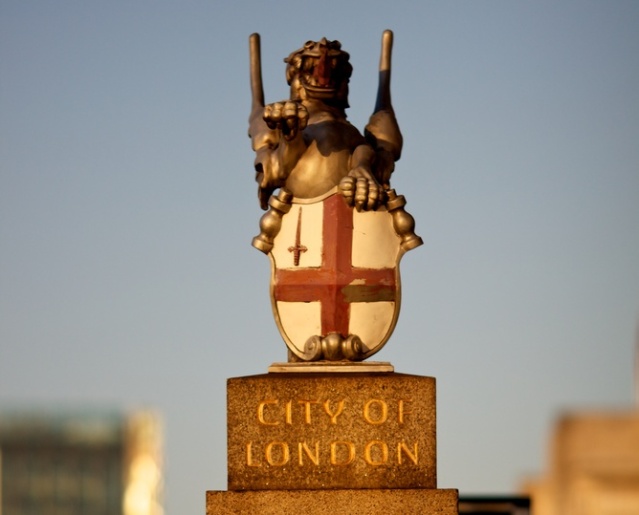 A dragon stands guard at the Southwark end of London Bridge,

The financial institutions in The City of London eagerly portray themselves as good citizens of the world, positively contributing to the stewardship of our planet and its people’s well-being. In reality, however, they are bankrolling a massive expansion of carbon-intensive industries worldwide with grave implications for people and planet.

The City is proud to claim that it has an “international reputation for excellence in the field of sustainable development”. It does so by striving to adopt measures to adapt to climate change, reduce emissions, support emissions trading schemes and sustainable cities initiatives such as green roofs. It plans to introduce a 20 mph speed limit, with the aim of reducing injuries and deaths on the roads.

Such talk might lead one to conclude the City of London is a model example, something echoed by many of the banks and other financial institutions based in The City, the most important financial district in the world.

HSBC has also recently launched a substantial Water Programme that, with three leading NGOs, promises to improve access to drinking water and sanitation for millions of people across the developing world.

Now, I’m sure HSBC and its competitors are well-meaning and can have some positive impacts on people and planet. But what the banks’ glossy sustainability brochures often forget to tell us, however, is how City institutions are inextricably linked to what Platform London has called the carbon web. This web shows that our addiction to oil and other fossil fuels has not simply fallen from the sky. It is a particular institutional arrangement between government, the legal system, extractive industries as well as civil society. The City and its financial institutions play a vital role in this web, not only holding it together but making extraordinary profits from it.

Recent LSE research has claimed that “the London Stock Exchange has become a carbon haven for fossil fuels”, showing that the FTSE 100 is dominated by multinational oil, gas and mining companies (often called the extractive industries).

Another recent report by the World Development Movementshows the inextricable link between The City and extractive industries, which are responsible for billions of investment in carbon intensive projects around the world.

The Bank of England plays its role through its quantitative easing (QE) programme. While the government and Bank of England tell the UK electorate that the money that is printed (this is essentially what QE is) supports the UK economy and its under-pressure, small- and medium-sized companies as well as hard-working families, in reality it is more likely to end up in the newly discovered oil fields of Uganda and other lucrative investments in the extractive industries in the developing world. This makes complete investment sense for the banks: high oil and commodities prices promise much bigger returns than a bog standard loan to a manufacturing firm in the Midlands.

The extraordinary thing is that the City’s billions of investments in the extractive industries, responsible for large quantities of carbon emissions, do not show up in the UK’s or the City’scarbon footprint calculations. This is why many fear that a carbon bubble is in the making, which might burst within the next decade.

But people and the environment are already suffering. In August 2012 I, together with Brazilian colleagues, followed some of the money channelled through The City to various remote places in the Andes in Argentina. As we speak, many people in the Andes – and many other parts of the world – are fighting against mega-mining projects.

One of the places we visited was Andalgalá, the town nearest to Argentina’s biggest mine, La Alumbrera. The mine is operated by GlencoreXstrata, the world’s third largest mining company, conveniently registered in the tax haven, Jersey.

What is often not well understood is that mega-extractive industry projects, such as this mine, often use millions of gallons of water and millions of tons of chemicals to literally wash gold, silver, copper and other valuable minerals out of the rock, selling these on international commodities markets. The people we spoke to in the Andes didn’t want these mega-projects at their door steps, as they are very concerned about the implications for their health, livelihoods and the environment.

In the City, not all that seems green is in fact, green. There is an urgent need to follow the money that is channelled through the City around the world, to assess the real destruction it can cause.