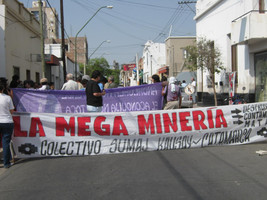 Abstract: “Latin America is experiencing a new era of the myth of development based on a model of extractivism. The most dramatic face of extractivism in the region has been, on the one hand, the growing presence of transnational mining corporations supported by national governments as well as regional and international finance and development institutions, and, on the other hand, the intense resistance against this development by social movements. In this paper we present the case of Andalgalá (a small town in the Province of Catamarca in Argentina) and the people’s struggle against transnational mining corporations and their allies. Following the tradition of the Philosophy of Liberation and Dussel’s ana-dialectic method, we have closely engaged with, what have been called, the “Argentinean communities of NO”, expressing their opposition to neocolonial forms of development and management. In this paper we are specifically interested in understanding how the two main managerial devices used by mining companies, corporate social responsibility (CSR) and governance pacts, impacted the people’s struggle. Overall, this paper provides a snapshot of the battles at the frontlines of extractivism. It hopes to give voice to those people who are normally not heard, providing a space for their views of a different kind of development.”